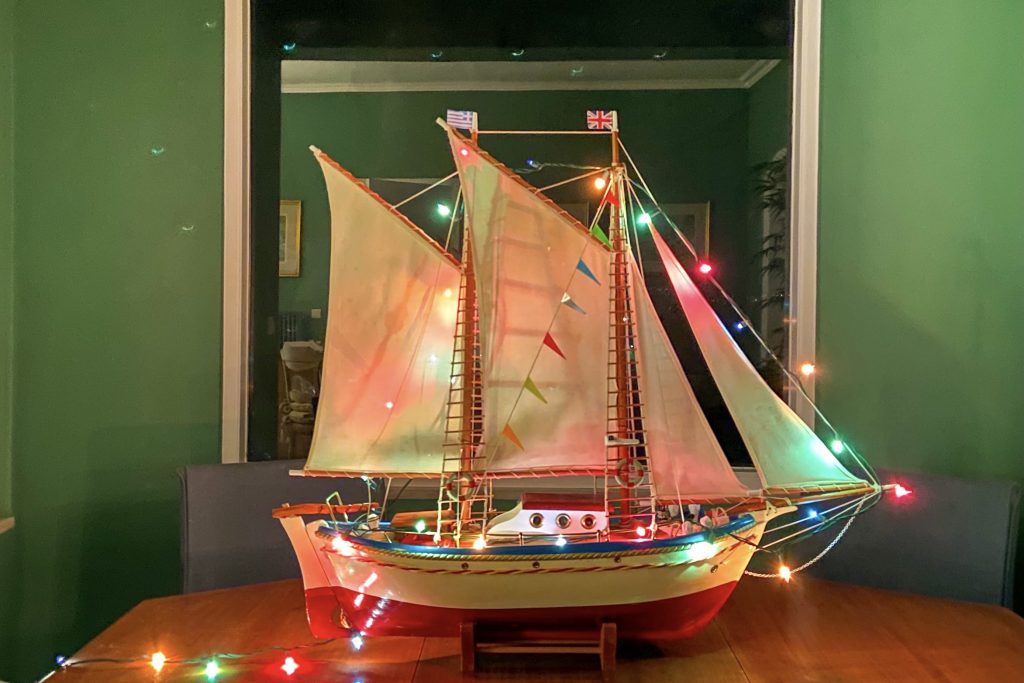 One of the most famous and popular Greek traditions at this time of year is decorating a boat for Christmas. If you ever visit Greece during the festive period, you’re likely to see a small wooden boat, or ‘karavaki’, decorated with lights in the central square of the town or village. Model boats are also decorated and displayed by many Greek households.

The precise origins of this tradition are unclear. Historically, it has been connected with St. Nicholas, the patron saint of seafarers, and has represented a show of appreciation to him for bringing the sailors home safely for the Christmas period. To this day, many families wait until St. Nicholas Day on December 6 to decorate their Christmas boats. Click here to find out more about how Greeks celebrate St. Nicholas Day. In addition, the decorated boats were also meant as a token of gratitude to the returning sailors for the work they do at sea, and served as a way of welcoming them back. A final meaning is found in the symbolism inherent to boats, that of voyages and discovery – in this case humankind’s embarkation on a new journey following the birth of Jesus Christ.

The tradition’s distinct connection with the rich maritime culture of Greece has meant that, historically, this custom is more common on the islands and in seaports than on the mainland away from the coast.

You may be wondering – do Greeks decorate a Christmas tree as well as a Christmas boat? The answer to this question is yes – but it hasn’t always been this way. In 1832, King Otto introduced the Christmas tree to Greece, but until the years following World War II, this remained a distinctly upper-class tradition. However, from the 1940s onwards, many Greek families chose to decorate a Christmas tree instead of a boat. In the 1970s, however, there was a movement to reclaim the practice of decorating boats at Christmas, and this Greek Christmas tradition has remained widespread and commonplace across the country ever since. Today, the main squares of the major Greek cities, along with many Greek homes, display both a karavaki and a Christmas tree.

(Related: How to support small businesses this Christmas)

These model wooden boats are typically positioned near the fireplace of the home, with the bow pointed towards the centre of the room. In the past, they were sometimes filled with gold coins to represent the wealth of the family, but today, many people continue this custom using chocolate coins instead. Often, children carry these model wooden boats as they go door-to-door singing Christmas carols, or ‘kalanda’ in Greek, hoping for their neighbours to drop food or gifts inside.

Though Christmas is not as significant in the Orthodox faith as other religious holidays, such as Easter, there are still many unique Greek Christmas traditions to learn about and experience. For a comprehensive guide to some of these traditions, click here.